Skip to primary content
When owning a racehorse, it is important to work with the trainer to pick the right race for your horse. Depending on the relationship between owner and trainer, picking the right race can fall on either party, or in the best case scenario, all parties agree to the right race for their runner.
Just like humans, not all horses are created equal. Therefore, a wide variety of races are offered at all tracks in an attempt to match up competitive groups of horses. A track employee, known as a racing secretary, puts together a book filled with different types of races. This book is called a Condition Book and traditionally, a new one comes out every two or three weeks. Trainers and owners use these books in an attempt to find a race where their horse will be the most competitive.
Understanding Conditions:
Traditionally, horses are grouped into one of four different categories:
Maiden – Horses that have never won a race. Once a horse has “broken its maiden” by winning a race, it must progress into one of the ranks listed below.
Claiming – The most common type of race, any horse in this type of race can be purchased for a stipulated price. Claiming prices vary from low to high and theoretically, the higher the price, the better the horse. The thought process is that this class level keeps people from running too good of a horse in too easy of a race because someone will purchase that horse.
Allowance – One step above most claiming ranks, allowance horses are not for sale. These types of races are typically contested amongst better horses that are preparing to compete in stakes races.
Stakes – These races are made up of the most talented horses on the grounds and are typically run for the largest purses. Traditionally, it costs additional money to start your horse in a stakes race.
Within each of these classes, there are subclasses that allow for horses to find even more competitive race. Furthermore, races are typically divided such that fillies (females) run against one another and colts (males) run against one another. We’ll cover some of these details today and will save other information regarding subclasses for another post.
Races Available for Crown the Cat
If you had a chance to look at the first post on this blog, you saw that Crown the Cat is a maiden, she has yet to win a race during her career. There are a few different classes of maidens that will run at Canterbury Park this summer, some of these are: Maiden Special Weight, Maiden Claiming $10,000 and Maiden Claiming $5,000.
Crown the Cat most recently raced in a Maiden Claiming $15,000 race at Indiana Downs and the start before that she raced in a Maiden Claiming $10,000 at the Fair Grounds in New Orleans. Due to the fact that she has been competitive at these levels, it makes the most sense to run her back at the Maiden Claiming $10,000 level at Canterbury Park.
There are two Maiden Claiming $10,000 races for fillies (females) in the condition book for opening weekend. The first is one is scheduled to be competed on Friday and the conditions are as follows:
Substitute Race #2:
For maidens, fillies and mares three year olds and upwards. Claiming Price: $10,000. One Mile. Purse: $6,500
Click this picture of the condition book to see the race, Sub. Race #2 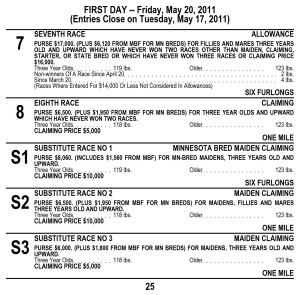 The second race is scheduled for Saturday and reads:
Third Race:
For maidens, fillies and mares three year olds and upwards. Claiming Price: $10,000. Six Furlongs. Purse: $6,500
Click this picture of the condition book to see the race, Third Race.

The only difference between these two races is the distance. Friday’s race is scheduled for one mile and Saturday’s is for six furlongs. (There are eight furlongs in a mile, thus the race on Saturday is a ¾ mile race.) At this point, our preference would be to run in the race on Friday because our filly has shown slightly more ability running at longer distances and she will likely hold a greater fitness advantage over her potential rivals in a longer race. Her most recent race was contested at that same distance and she ran a very competitive second.
Unfortunately, not all races that are scheduled by a racetrack are actually used. Tracks write more races than end up being contested because it isn’t always possible to determine which races are going to draw the best fields (highest number of horses). Customarily, tracks try to use races with more horses entered in them in attempt to generate the most betting handle (revenue). Furthermore, early in the meet, it is a definite possibility that Friday’s race, the one mile event, might not field enough horses due to the fact that many of them are still working out in order to get back into shape as they haven’t raced since last racing season.
Therefore, at this time, our plan for this week will be to enter Crown the Cat on Tuesday for Friday’s race (the one mile race). If that race doesn’t fill, we will enter on Wednesday for Saturday’s race (the six furlong sprint). In all likelihood, one of these two races will field enough entries and will be contested on opening weekend.
Due to the fact that she is fit, Crown the Cat will be ready for either race. Our first preference would be to run Friday, but Saturday would also make sense.
There is a lot of information contained within this post, if you have any questions, please comment and we will post answers. Racing is a complicated game and the goal of this club is to help you understand some of the finer points. Therefore, please be sure to ask all of your questions.
Tomorrow, we’ll give you more information regarding the conditions of the potential races for Crown the Cat and we will keep you updated on the entry process throughout the week. Keep your fingers crossed this week, hopefully we’ll be able to race next weekend!

5 thoughts on “Finding the Right Race”