ASK EDDY will be running for the first time for us without a claiming tag on Friday night in the 5th race. The condition is a starter allowance for horses that have raced for a claiming price of $5000 or less OR $7500 claiming. As a refresher, if you ran for $5,000 or less you do not have to be eligible to get claimed or you can enter for $7500.

The field is only 6 horses but there is definitely some competition at the top – including us. Alex Canchari has opted to ride another horse in the race so we will retain the services of Nik Goodwin.

The 5th race should go off around 8:35. My kids are landing at MSP at 8:57 so, unless there is a delay in their flight, I will end up missing the race, though either Jeff or Jilique will be there to more than ably fill in.

More details to follow as well as the analysis of the race later in the week.

We are all set for tomorrow morning. Those of you that are signed up for tomorrow morning’s tour, please meet at the Canterbury stable at 9:45 AM. There is parking available outside the gate. We’ll meet you there and escort you in. Given the number we may stay together or break up into 2 groups. We’ll end up at Clay’s barn at the end.

It looks like it may be a bit cool in the morning again, so make sure you dress appropriately – there is no place to hide from the weather! And the backside is dusty and has dirt roads so wear appropriate footwear as well.

Look forward to seeing you all in the morning.

A lot to cover today!

Below is some video that Michelle Benson put together along with some still shots of EDDY going over to the track to gallop yesterday. Clay said our boy is feeling very good and we’re looking to enter him as soon as possible. We tried yesterday in an open $5000 claiming race but it only drew 3 entries so that didn’t go. We may be looking at a $6,250 or maybe even a $7,00 claiming race. Another possibility is to enter EDDY in a $7500 turf race but as an “Also Eligible” for the “Main Track Only”. This puts us in a position to get into the race should it be called off the turf and several horses scratch.

Though doing well, Clay wanted to give MUNDY another week or so before her next race. Her better efforts seemed to have been off of longer breaks and 2 weeks just didn’t seem to agree with her.

The backside tour dates have been set. Each tour will be limited to 75 people. We will split you up into 3 groups of 25 and we will check out the Administration building, the trainer’s stand/workouts and the pool before gathering outside of Clay’s barn where either EDDY or MUNDY will be led out and Clay will be available to answer questions. There is too much activity and too many people to get through the barn but Clay will have one of the groom’s bring out a horse so we can take some pictures.

We will meet at 9:45 at the backside gate. Jeff, Jilique and I will me you there and escort you in. The tour is a walking tour and the distance traveled and amount of standing will be considerable so please keep this in mind when rsvp-ing. I would anticipate the tours lasting about 90-minutes or so. The dates are:

We are also looking at one large group event one of the last weekends of the meet in the morning on the frontside leading into the raceday.

Email me at ted@grevelisracing.com to rsvp. Should we “oversubscribe” one of the dates, we will use the time stamp on the email as the divider. 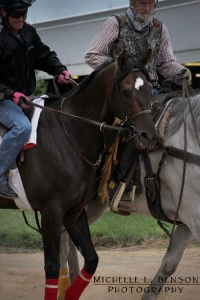 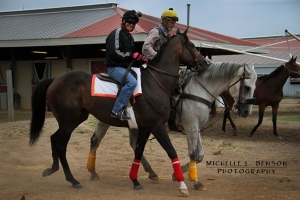 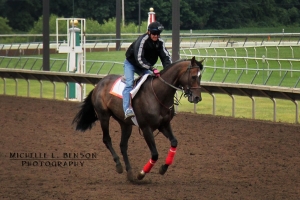 If you click above you can access the spreadsheet with the financials for the first three months. Much of it is self explanatory, but here is a rundown from top to bottom, keeping in mind that we NOT seen the vet bills yet but I wanted to get this up once we got Clay’s June bill:

The top portion is income.

The rest of the sheet are expenses – which is about the right proportion for this game sometimes.

Claiming – the claiming price of the horse
Training – the training portion of the bill or ‘day rate’
Farrier – getting the horse’s feet trimmed and shod
Vet Bills – veterinary care
Jockey Fees – the amount of money received by the jockey for a non-winning mount. In this is case Juan Rivera received $115
Management Fees – $200 a month to the club management company
Trainer Purse % – trainer receives 10% of a horse that comes in 1st 2nd or 3rd. This month, with EDDY’s win and MUNDY’s 3rd, Clay received $771
Jockey Purse % – jockey receives 10% of a winning ride. This is in lieu of a regular jockey fee, not in conjunction with one. In this case, Alex received $540
Management % – the management company receives 5% of any 1st, 2nd or 3rd purse money. In this month, the 1st & 3rd place finishes netted the company $385
Transportation – $300 for transporting EDDY from Chicago to here
Pony to Post – for each race, each starter receives a pony to accompany them to the post. The fee for this is $25 per race.
Licensing – The group, Canterbury Racing Club 2013, needs to be licensed with the Minnesota Racing Commission
Equine Retirement – $2 per start is set aside for equine retirement groups. AT the end of the season, Canterbury Park matches the money collected and it is split among several area groups that help ex-race horses transition to retirement
Groom Bonus – A $50 bonus to the groom of the winning horse.

Here is a little video respite from the heat. MUNDY back getting some exercise and captured by the incomparable Shelly Benson!

MUNDY came back from her race okay but when Juan got off her he mentioned that she coughed a bit on the way back to be unsaddled and seemed to just not have been into the race at all – that he really had to get after her to get her to run.

Clay was a concerned so he had her throat scoped to make sure that she had not bled or had some other issue to during the race. It turns out that one of the flaps in her throat had stuck shut so she was only getting half the air that she should have normally been getting. Sometimes this happens in horses when they get worked up though not every time. The news is that this condition, while permanent, is not necessarily something that will happen every time – or every other time even. There is not much you can do except run her in a figure eight bridle and utilize a tongue tie, which is what we’ve been doing.

A couple of thoughts on her next race: possibly try her at 6.5 on the dirt. Her last workout on the dirt got us thinking that maybe she might do well over the main surface. Her couple of most recent tries were awful, but they were also in stakes races.

We also could drop her to $7500 over the turf and see if she can catch a field where she can go to the lead and settle, something that she can’t do against the caliber of horse she’s been running against. We’d run the risk of her getting claimed but the point isn’t to protect your horse, the point is to try and win races and earn money.

EDDY has been exercising just fine and could run again the weekend of July 27th in an open $5,000 claiming race, a small notch above his last race. He seems to be doing well and we want to make sure that we keep bringing him along steadily.

We also could be looking at that weekend for our first backside tour. Details to follow.

Another fabulous job by Shelly Benson putting together a video of MUNDY’s day. It certainly didn’t go as planned and we’ll be taking a bit of an extra look at her this week to make sure all systems are okay. I’ll keep you posted.

The club is shooting for its 3rd win a row tonight with MUNDY facing a small, but tough, field of fillies and mares in a $10,000 starter allowance/$12,500 claiming race. The race is 7.5 furlongs over what should be a firm turf course.

While it seems odd that we would run her less than her purchase price, she ran third last time at the same level for the 2nd race in a row and, should she be claimed but win, we still come out ahead. Even a second, with 20% of the purse of $20,000, we break about even. You need to place horses where they can win. In theory, before seeing the entries, this would have been a perfect spot for that. As it turns out, a couple of horses that meet condition 1 are pretty tough.

Here is the field.

Fleet Dyna (McKenzie/Martin): A fast closing mare, she got to the front a bit too early last out and was nipped at the wire, dead-heating for second, in a $10,000 claiming race. She has two straight seconds over the Canterbury turf and will be coming off the pace.

Pink Leninade (Shyrock/A Canchari): Mare has been on the board in 3 of 5 turf starts, but it’s been a while since she’s raced on turf. Those efforts were over the Arlington Park turf course last summer going considerably shorter than this race, though in $25,000 conditioned (non-winners of 3 lifetime) claimers. She likes the front end and will be on or near the lead early.

Machorina (Chambers/Bell): The prohibitive favorite has reeled off 3 consecutive wins since returning to Canterbury, beating our gal twice – albeit over soft turf courses. Another who wants to be close to the lead, she just won at $25,000 and meets the first condition having started for $10,000 at Remington Park last fall.

Sera’s Tunnel (C Asmussen/Shepherd): Speedy stakes placed mare that has been running in Texas and Oklahoma after leaving Louisiana. She’s very consistent but also likes to be close to, or on, the lead (sensing a pattern here).

Inside Deal (Brueggemann/Goodwin): Front running speedster that set the pace in MUNDY’s last race before fading to 7th.

As you can see, there is a lot of speed in the race. At first blush that may look problematic for our gal who tends to like the front herself. However, while she hasn’t won from off the pace that we can see in her past performances, I her last race she rated nicely under Juan behind the early speed and was well positioned to close, actually gaining the front before being passed late.

A similar strategy over a firm turf course and the result could be different considering how many will want to go to the lead. The key will be how early Machorina moves and if she has enough pressure to weaken while doing it. MUNDY could be in a perfect position to pick up the pieces while not having to be too far out of it.

In order to win, the race will have to unfold nearly perfectly for us and on paper it looks pretty tough, but they don’t run the races on paper and once the gates open, anything can happen. She’s talented enough to be in with this group and if things can break our way…

Good luck and see you all in Silks before the race tonight!

Another installment of: EDDY’s in in video and pictures!

EDDY getting tacked up in the paddock.

Pulling away in the stretch 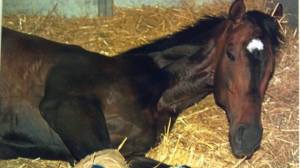 Resting up after a job well done