ASK EDDY prevailed by a head at Hawthorne this afternoon under a great ride by Alex Canchari. He was also claimed out of that race by Midwest Thoroughbreds. EDDY stalked in perfect position and made his move right down the center of the racetrack but tired near the end but managed to hold on for the win.

Given the late date, it looks as if this will be the end of the road for Canterbury Racing Club 2013. It will still take until after the first of the month to close out the bills and solidify the financials but all in all a good year for the group.

Look for a recap as well as details on the 2014 Club shortly. 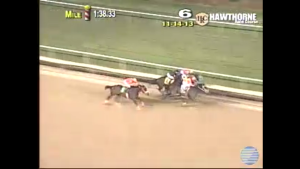