MARYJEAN steps into allowance ranks Friday night and it does appear that her figures make her competitive here. Let’s take a look at the field.

1) Platinum Lady (Heitzmann/Butler) – She had two near misses in MSW company followed by a powerhouse win. Her huge jump in speed figures appears to be an anomaly, but may the addition of Butler made the difference? If her last is an indication of her true ability then we are all battling for second.

2) Visual Blessing (Bolinger/Martinez) – Hasn’t won since May of ’13. She finished 4th at this level two back before being outrun on Extreme Day in the 2 furlong dash.

3) Informal Fannie (Bethke/Stevens) – Took a state bred allowance last out. Speed figures appear to make her a cut below the rest in here but she does have some early speed which can be dangerous at Canterbury.

4) Holiday N Newport (Brinson/Martin) – Clay’s other horse in the race is a $6250 claim who ran third at this level, off the turf, last time out. It is worth noting, however, that she was beaten soundly by the top two. She likes to be near the lead and with our girl’s running style, a pace prompter is always welcome.

5) Princess Dinah (Padilla/Canchari) – This is the lady that Alex is riding. She had a very solid two starts at Arlington over the polytrack there and had a respectable third in her first out here in June, though fialing as the favorite. A former Brinson runner, Clay does not think that she is out of our class at all.

6) Mount Stepney (Sweere/Escobar) – She’s hit the board in all three career starts and finished second behind an excellent performance by It’s Amore at this level last out in her first start of 2014 where she tried to come off the place rather than show the speed she did in her two 2013 efforts.

Winning this one will be difficult. If PLATINUM LADY is the real deal then, like I mentioned above, we’re all running for second. A couple of things do play in MJ’s favor: PLATINUM LADY will want to be close to the lead but many of the others will want to be on or near the lead as well. This should hopefully push the pace along quicker than anyone (but us!) want it to be. If Dean Butler can rate the favorite off the pace and not get dragged along too quickly, they are going to be really tough when the running starts.

MJ may be coming from a bit further off the pace than she is used to in what promises to be pretty quick early fractions. I think she can outrun VISUAL BLESSING and PRINCESS DINAH – I’m just not sure if she came overcome Platinum Lady.

MARYJEAN is going on Friday night. We entered her in a first level allowance race for horses that have never won a race outside of maiden, claiming and starters which is why she fits in this condition – she’s only ever won a maiden race and claimers.

We had the option of possibly dropping her down to $5,000 claiming to get a race but the thought was that there are times when these first level allowances come up light and she’s been training excellent so we’d give her a shot there with the option of dropping down later in the meet. The race is the 5th going six furlongs over the dirt with a purse of $28,500. Alex Canchari has opted to ride another in the race but we don’t miss a beat with Ry Eikleberry getting the mount.

Unfortunately (or fortunately), Friday night at the track is a very busy time and all the venues are booked so this is one of the rare times that the club will not have a place of our own for everyone to gather. I will meet you all in the paddock prior to the race.

Group 5, you all are up this time. As a reminder, group 5 consists of Schneidermann – Ziegler.

We are aiming for TERICE to run on August 9.

MARYJEAN’s race did not fill again but this time it was not brought back as an extra because of the lack of entries. I’ll get with Clay and we’ll figure out something, most likely dropping her down a notch or two to get her a race.

I’ve been gathering more questions and we’ll tackle them here. Several were on purse distribution and others had to do with horse identification.

1) What is the purse distribution of a race and is the purse amount for the winner or split among all the horses?

– The listed purse for the race is what is to be divided among all the participants. Purse distribution is related somewhat to field size. The winner always gets 60%. In races with 10 or fewer starters the 2nd place finisher receives 20% which decreases to 19% for 11 starters, 18% for 12 and 13 starters and 17% for 14 starters; races with 9 starters and under the 3rd place horse gets 11% while any more starters and the horse gets 10%; Fourth is a little more spread out from 6% for smaller fields to 3% for larger fields while 5th on is generally 1% unless the field is small where the also-rans get 1.5% and 3% for six and five horse fields, respectively.

2) How are horses identified? When are they tattooed? Will microchips ever be used?

– Horses are identified by a tattoo on their upper lips. It’s not a tattoo that you would see on a human but a quick, basic set of numbers made up of dots. There is a method to the madness. A Thoroughbred tattoo has one letter, which indicates the year of birth, followed by four or five numbers, with horses over 25 years of age having only four. Horses foaled outside North America will also have an asterisk (*) at the beginning of the tattoo.

– There has been no indication that I know of that The Jockey Club is inclined to move toward using microchips as identification, though it would seem to be a much easier method of identification.

The race we were pointing MARYJEAN for, $10,000 claiming, did not fill. It was brought back as an extra for Thursday night – this time at 6 furlongs instead of 5 1/2 furlongs, which is better for her.

So we wait and enter this weekend for Thursday night so I will update you all again on Saturday afternoon.

Our thanks to everyone who came out for the tour this past weekend. It was a lot of fun with a lot of good questions and some quality time with the girls! Heather took a bunch of photos and we took a few and published them below for everyone.

MARYJEAN worked out this morning and fired a good one: four furlongs in :47.2, the fastest work at the distance today out of 24 horses. She’ll have a black dot (a “bullet”) next to that workout in the next Racing Form indicating that. In track slang that’s called “firing a bullet”.

We’ll enter on Thursday for Sunday so we’ll know on Thursday evening if the race fills and we’ll be racing.

Part of the group watching morning workouts. As it turned out, TERICE came out on to the racetrack for a gallop which was an unplanned surprise. 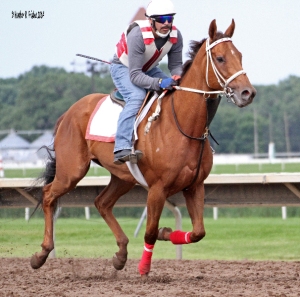 TERICE galloping by under Juan Delgado.

A closer look at TERICE

Done for the morning, Juan takes TERICE off the track and back to the barn to cool out and wait for visitors!

A visit to the pool where we watched a few horses work and learned about the therapeutic benefits of aquatic exercise. 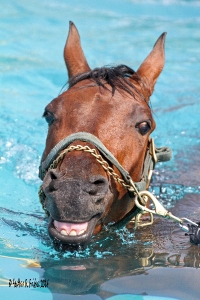 TERICE soaking up the attention. 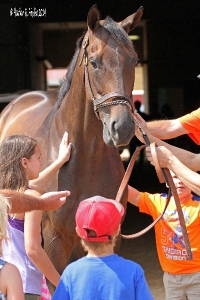 Not to be left out, MJ basks in the lovin when it was her turn!

We’re full up for Sunday! Very exciting stuff. Michelle, Heather and I will meet you at the stable gate and then escort you all in.

If you’re not familiar with where the stable entrance is, here are some directions:

If you come off of 169 on Canterbury Rd, go past the track, past Culver’s and you’ll see the KMart warehouse on your right and the backside on your left. Take the next left and then your first left into the stable gate area. There is some parking available. If you can’t fit, you can park across the street near the open field, but please make sure that you are pulled as far to the side off the road as you can be.