Tonight Belle will be loaded up and moved to Lexington, KY, home of fabled Keeneland Race Course.  The Litfins will settle her in and she’ll hit the track over the weekend.  She’ll get a feel for things and then Nevada would like to get a breeze in her to get her ready for competition and a feel for the racetrack.

We will be very aggressive in her placements from here on out.  We can’t keep her at the end of the year so we will see how many wins we can get with her while making her a tempting claim.

This is where the Club starts to differ a bit from owning a horse outright.  Naturally when you have the ability to own a horse year after year you may be less aggressive with a 4-year old filly and see if you can climb her up the class ladder a bit. We can’t take any chances of having the horse on our books at the end of the year so we will see if we can win a race or two at a couple of the most fabled tracks in the country.

We’ll touch base after she’s arrived and settled in let you all know how her trip went.

Below is the latest financial update through the last day of the meet with a few items that are extrapolated based upon previous billing but gives you all a pretty accurate idea of where we stand starting Keeneland in October.

The plan in Kentucky is to be very aggressive in her race placement meaning we will be going after wins.  We have to have her claimed/sold by the end of the year so it’s time to go right the opposition and we’ll be looking at sprinting her against lower level claimers and pile up as much purse money as we can before someone decides to take her from us.

With the Canterbury meet concluded, the Litfin stable prepares to move to Keeneland. Nevada discusses yesterday’s race and the preparation and process of moving a stable from track to track.

Closing weekend is a big one at Canterbury this season – two days of 13 races each, really big fields and the Canterbury Racing Club trying to take home victory number 3 in the final race of the 2017 season.

Belle will be breaking from post 8 in the 12 horse field with Orlando Mojica aboard.  The race is a $7500 claiming race going a mile and a 16th over the turf course.

Here is a look at the field.

Chub’s Charmer (Westerman/Mawing) – Just missed at this level last out and gets a bit more distance to work with in this race.

Betyar (Robertson/Loveberry) – Cleared her conditions at $12,500 so it’s not unusual to see a horse drop after that but ran so well in optional it does surprise me a bit for the low tag.  Should be on or near the early lead.

Tactical Girl (McShane/Hernandez) – Started her CBY season at this level and performed admirably before a pair of sixth place finishes.  Definite off the pace type.

Looking at Beauty (Rhone/Escobar) – Well beaten 2nd last out but well clear of third.  One with a bit of speed so should help determine the shape of the race early.

Bear Facts (Lund/Ramgeet) – Winner by a nose last out when Belle finished 4th.  She came from well out of it under a well timed ride.

Lady Babako (Bravo/Hamilton) – Speedster moves in from the outside post in the last where she was only beaten 2 1/4 in her last (where we finished 4th).

Emma Lea’s Song (Silva/Goodwin) – Winner at this distance and level 2 back where she beat several in here. Will be looking to pounce late.

Victory Ice (Scherer/Velazquez) – Had a rough go of it last out when re-entering open company.  Regular pilot shifts to another mount.

Lil Mighty Mo (Anderson/Lopez) – Minnesotan has had a rough go of it but hasn’t run this low before either.

Waytogo Trish (Anderson/Delorme) – Won two back at a mile over the turf in this level and did it, like most turf races, from off the pace.  Bounce back race last out, though, was a disaster, trailing nearly the entire way.

She seems to have the right style for a race like this.  She can stalk the pace without needing the lead and then get first run at the leaders late.  She really ran okay in her turf debut and was able to close a bit.  If Orlando can keep her relaxed and in position to pounce, hopefully she’ll have enough to get by the fading speed and hold off the late chargers.

The last day of the season is really crowded so we do not have a spot for this race.  Remember that we’re all welcome into the paddock but please keep it to members since it could be a lot of people and there is a full field.

Good luck everyone and thanks for a great live racing season, you all have been terrific!

Brilliant Belle races Saturday in the final race of the 2017 meet. Nevada explains how she got there in this video. 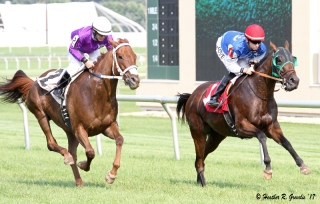 Belle will break out of the 8 post in the season finale on Saturday with Orlando Mojica on board.  The race is on the turf going a mile and 16th and a $7500 claiming tag.

She handled the turf fine and she rated well so trainer and jockey both think she can handle the added distance.  She’s in very good shape so with some speed to run at and a solid early position, we could have a shot at closing the season with a win.

If we still have her after the race we will pack her up and ship her off to Keeneland with the Litfin gang.

It is Paddock Group 3’s turn but given that it’s her last race of the summer, on the last day of the meet in the last race of the season, feel free to join us in the paddock if you are there.  However it will be a full field so please limit the paddock to members only for this race.  We are in the middle of the field so we don’t have room on either side of us to spill over like when we are out of the one hole.

Belle is 8-1 on the morning line in a full and competitive field.  Good luck!

Brilliant Belle tried the turf for the first time in two years and she handled it like a champ.

Jareth Loveberry rode her superbly, keep her just off the early pace and settled in along the rail. When things opened up on the turn for home she angled to the outside and had a clear shot at the leaders. The 7.5 furlongs proved to be too much, however, and she settled for 4th.

I was very happy with the way she ran. She tried hard the whole way and handled the new surface and distance well.

We’ll see how she comes back and if all is well, we’ll try and get her in one more time for the home crowd before she departs for Kentucky (or gets claimed).

The Club has the deck at Silks reserved so there will be outside seating on what promises to be an absolutely gorgeous day today.  There are also a few reserved inside so you can all enter from the inside and get out on the deck from there.  It’s going to be relatively crowded today for the last Sunday racing day of the year so we’re fortunate to have such a great space – please feel free to take advantage of it!

And just for fun:

Johnny Love, Star Tribune – TACTICAL GIRL lost the bob two back on the turf, and is the pick in this wide-open affair. Be patient, because the veteran mare will be closing late. BRILLIANT BELLE hasn’t been on the turf in over two years, but she brings a ton of early speed to the race, The rail will be a magnet to her with her quick turn of foot. BEAR FACTS runs a good one every other race, so due for a good effort, after running a dud last out. Confirmed closer needs a snappy pace.

Belle will try for 2 in a row Sunday afternoon in race 7.  The race is a $7500 claiming race going 7 1/2 furlongs over the turf.  She’ll break from post one with hot rider Jareth Loveberry aboard.

It is Group 2 in the paddock and I’d like you all to prove to the Group Oners out there that they aren’t the only paddock group that can win!

We have a spot in Silks so look for the signs.  It’s supposed to be a pretty good day with little chance of rain.

Let’s take a look at the field and then we’ll look at how Belle could win.  I did not cover the Main Track Only entry, Strength N Beauty, or the Also-Eligible, Ten Percent Down.

Dakota Peach Pie (Rickert/Bedford) – She has not been in great form recently and returns to the turf for only the second time.

She Starts Theball (Donlin/Lindsay) – Is really stepping up in here coming in from some of the smaller tracks.  Will really need to improve over the turf to be a contender.

Chub’s Charmer (Westerman/Mawing) – Closer ran a game 3rd  last out at this level and will need some pace to run at in here.

Waytogo Trish (Anderson/Thompson) – Another closer who had a really nice go two back at this level in June.  Came from well off the pace and drew off to win easily.  Was absent for nearly 2 months and then threw in a clunker.

Natalies Storm (Pearson/Lopez) – One who should prompt the pace, the 8-year old has won twice over the Canterbury lawn.

Emmy Got Even (Anderson/Sanchez) – Another pace prompter but this one is trying grass for the first time.

Tactical Girl (McShane/Hernandez) – A pair of nice grass tries at this level this meet coming from off the pace.

Passing the Grade (House/Hamilton) – Six of eight in the money over the turf here.  It’s fair to assume she should be better than her speed and fade last out after a six month break but has been off another 6 weeks after that effort.  Should be pushing the pace.

Sweet Tango (Bethke/Velazquez) – Minnesotan has had a tough go versus open company this season.

Bear Facts (Lund/Ramgeet) – Had a turf score to kick off the meet at $10,000 though the last out, at $7500, was clearly inferior to that effort.  May be able to draw a line through that one, though, given the near miss the start before.

Lady Babako (Bravo/Mojica) – Speedster drew the outside which is always tough coming out of the chute.  Cleared his last condition at $20,000 and is settling in here at $7500 after a poor last out.

There is some speed in this race which I think bodes well for Belle.  We’re not really concerned about the turf – she’s handled it before with a 3rd in her second career start in a maiden race in Indiana.  She cruised along in 2nd most of that race so I don’t anticipate any issues handling the surface.

She rated well last time out so breaking from the one the speed should get out past her but she should be able to settle in behind the early pace.

They key is the distance.  Can she get 7 1/2 furlongs?  That will be the question that will need to get answered.  If she can she’s going to be very tough.  Jareth Loveberry has been simply on fire as of this writing, winning 7 races over the weekend so far.